The Importance of Being Earnest

The XVII Cumbre Iberoamericana (Ibero-American Summit) was celebrated in Santiago de Chile over the last few days. Political leaders or their trusted representatives from 19 Latin American nations were united to confer about ‘social cohesion’, as well as Heads of States from Spain, Portugal and Andorra, plus Spain’s King Juan Carlos I.

Spain, or course, has a very special relationship with most of these nations, due to its colonial domination of most of Latin America during the best part of the past 500 years or so.

King Juan Carlos of Spain is usually regarded as a moderate and considerate Monarch, not usually known to be losing his tempers. On Sunday, however, he set a precedent that he may come to regret by telling Venezuelan President Hugo Chávez to shut up (“¡¿Por qué no te callas?!”).

The King’s quite undiplomatic, angry outburst at the Ibero-American summit followed days of criticism by a number of Latin American leaders of Spain’s contemporary political and business influence in former Spanish colonies. 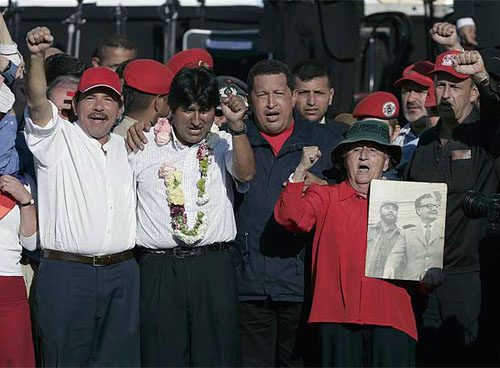 President Hugo Chávez reminded the summit amongst other calamities that Spain had been responsible for the largest genocide that the history had ever seen, after the Latin American continent had been conquered in 1492, claimed for the Spanish Crown, and colonized thereafter.

Spain’s El Periodico newspaper, representing the Catalonian region where anti-royal sentiment runs high, said on Sunday that Chávez’s behavior had been quite intolerable.

The Spanish national newspaper, EL PAÍS said in an editorial, “Maybe it wasn’t the best thing to say but the Monarch’s fit shows just how much the Venezuelan (… President’s …) diatribe upset the Spanish”.

But some observers reacted with unease about the King taking on a more political role when the Monarchy really has a symbolic state function under Spain’s constitution.

Juan Carlos I won the trust of Spaniards by promoting the transition to democracy after the death of dictator Francisco Franco in 1975 and has always distanced himself from any political role.

One of the few voices in Spain to criticize the King over the attack on Venezuela’s Chávez came from the Izquierda Unida group, which said that King Juan Carlos acted like a 17th century monarch addressing his vassals.

“Telling an elected head of state to shut up is something you can’t do in Spain or abroad”, a spokesman of Izquierda Unida was quoted as saying.

According to the Associated Press news agency, Hugo Chávez responded to the King’s outburst: “I do not offend by telling the truth. The Venezuelan government reserves the right to respond to any aggression, anywhere, in any space and in any manner”. Hugo Chávez also pointed out that he had been democratically elected three times, whereas he hinted that no-one ever had voted King Juan Carlos into office.

King Juan Carlos already had a controversial time earlier last week when he visited Spain’s disputed North African enclaves, Ceuta and Melilla, sparking protests from Morocco, which claims the territories as theirs.

It looks to me as though it may not be so easy to be a King in this day and age, be that in Spain, in Morocco, or wherever. Perhaps times have changed and not everyone has taken it in, yet.

The world is no longer what it might have been in 1492, or so it would appear.

This entry was posted in Latin America, Spain, World Affairs. Bookmark the permalink.