Have You Seen the Pyramids of … Spain?

On the whole, people go to Egypt if they want to see some pyramides. Or Mexico. Or Peru.

Well, they could try Spain as well. The Canary Isles, actually.

Sitting around 100 kms off Morocco on the North West coast of Africa, eleven volcanic Islands make up the archipelago of the Canary Isles.

Tenerife, the largest of the Canaries, proudly sports the Black Pyramids, one of the Canary Islands’ many mysteries, resembling similar structures in both Mexico and Peru, with six angular stone steps.

Offering some insight into the ancient civilizations that once inhabited the area, the Parque Etnografico ‘Pirámides de Güímar’ is situated in the Tenerifan town of Güímar, with a museum, café and souvenir shop nearby. The Black Pyramids are an attraction for anyone on holiday on the island of Tenerife.

Archaeologists still know surprisingly little about the pyramids that form the complex, although excavations indicate that there was a community based around them. The complex comprises of six-steps pyramids which are aligned to the East, suggesting that they were used to worship the sun. During the sun solstice, they are said to line up with the sunset in a distinctive spot on the mountainous horizon.

The Canaries’ unique geographical location has made the Islands an important point in maritime routes for hundreds of years; Columbus, for example, used La Gomera as his last port of call before he made the long trip across the Atlantic Ocean to America. 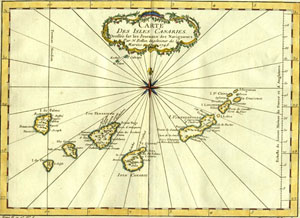 For years there has been dispute as to whether Leif Eriksson, the Norse, or Christopher Columbus actually discovered America first, but there seems to be a distinct possibility that both of them were a few centuries too late and that the people of Meso-America and the Islanders of Tenerife established expeditions or even trade routes between their respective civilizations, actually much earlier.

Norwegian explorer, anthropologist and author, the late Thor Heyerdahl spent the last few years of his life in Güímar, supervising the archaeological mission there to survey and preserve the pyramids and the complex they were part of. Thor Heyerdahl was convinced that South Americans had crossed the Pacific to reach Polynesia and in 1947, he undertook a successful ocean crossing in a primitive raft, the Kon Tiki, to prove his theory. He then expanded his theory further, claiming that if Peruvian explorers first travelled across the Pacific and settled in Polynesia, it was possible that Tenerife was settled in a similar way. In that case the Peruvian pioneers would have built their temples and pyramids along similar lines to the ones they had left back home. If Dr. Heyerdahl’s theories are correct, then it is clear that those Peruvian seafarers might have been responsible for the construction of the pyramid complex discovered at Güímar.

Only few scholars endorse the idea, however, that American Indigenous Indians navigated the oceans in the way Thor Heyerdahl suggested, and discount this hypothesis largely on linguistic, genetic and cultural grounds, all of which point to the settlers having come from the east, not the west. However, none of the scholars have come up with a convincing explanation as to how the Canary Islands ended up with their own step pyramids.

At the same time, no one can deny that there are undoubtedly parallels between the Meso-American cultures and the Canary Island cultures. Artefacts have been found on the islands that are almost identical to ones found in South America.

If you fancy a bit of theorizing yourself, even a bit of Kon Tiki rafting, you better make your way to the Canaries one of these days and see for yourself.

This entry was posted in History, Islands, People, Spain, Travel. Bookmark the permalink.

4 responses to “Have You Seen the Pyramids of … Spain?”