Moros Against Cristianos – Year After Year 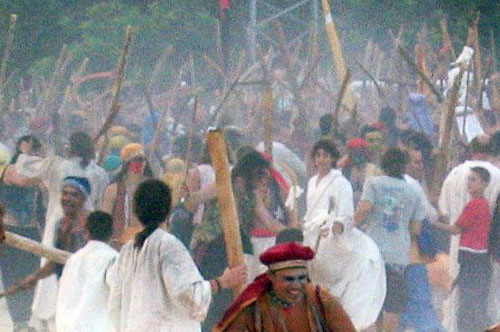 I want to alert you to the fact that the Mallorcan town of Pollença celebrates the Fiesta de la Mare de Déu dels Àngels this week, which culminates in the annual battle of Moros y Cristianos (that’s Moors against Christians) on Thursday, 2 August.

This is one of a number of main events that Mallorca and, in fact, most of southern Spain celebrates under the same heading, Moros y Cristianos, but at different times and commemorating different historical dates. All of them share, however, a similar reason: that of an earstwhile attack by either Arab or Moorish intruders, or Saracen or Turkish pirates. Sóller and Puerto Sóller, again in Mallorca, for instance, celebrate the Fiesta de Nuestra Señora de La Victoria, or ‘Es Firó’, in May, when Moros and Cristianos sort it out between themselves, with the Moors losing every time, just as they did on 11 May 1561. This was the date when the Arab pirates, coming from Algiers, disembarked in Sóller, meeting fierce resistance from the local Christians. Luckily, the Viceroy from Ibiza had sent warning to the citizens of Sóller who could therefore prepare themselves and organise their defense. Santa Ponça, however, commemorates a famous battle of 1582, when 150 North African pirates were defeated by only 50 Cristianos. This victory is celebrated every year on 13th May in another Fiesta de Moros y Cristianos.

The Pollença fiesta, celebrated this week, is more distinctive. La Diada de La Patrona starts at 05h00 in the morning of 2 August. All day long, different activities or events build up to the commemoration’s high point, when at 20h00 the battle between Pollençins and Turks is reenacted at the local football ground. The population of Pollença dresses up in either white, for the Christians, armed with sticks and farming utensiles, or full colour and head dress for the Saracens (Turks), armed heavily with scimitars. Gun barrels are impressively fired with gunpowder and live fuse. Ear shattering. Both camps are united, though, in the consumption of spirits throughout the day.

The local population gets quite carried away by it all, as do some camera equipped tourists, and not just for the alcohol. I am not so sure, though, that in the long run this tradition is very helpful for the relations between two major religions in this day and age.

I won’t go to Pollença this Thursday.