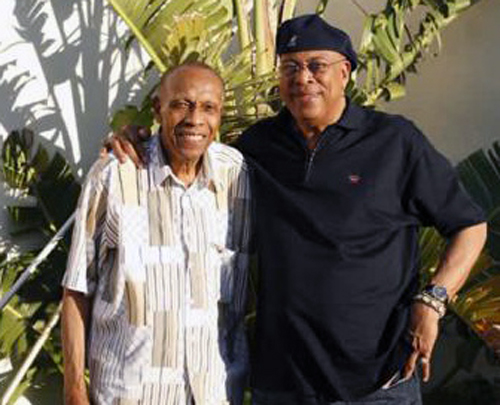 Bebo Valdés, legendary 88 year old Cuban piano grandmaster and his 66 year old son, Chucho Valdés, another piano wunderkind, are in Spain, giving a concert tour. They played last night in Barcelona and will have a second performance there again, tonight, at the Teatre Grec.

Bebo Valdés is one of the finest pianists Cuba has produced and is an outstanding figure in Afro-Cuban Jazz. Bebo Valdés left Cuba for Mexico in 1960, resided in USA for a short time and then made his home in Sweden after that, until 2007. He now lives in Málaga, Spain.

His son, Chucho Valdés, began playing piano when he was three and by the time he was 16 he was leading his own group. When his father defected from Cuba, Chucho Valdés stayed behind. In 1967, he formed the Orquesta Cubana de Musica Moderna and, in 1973, he founded Irakere, the top Cuban jazz orchestra; among its original members were Arturo Sandoval and Paquito D’Rivera. Chucho Valdés has been Irakere’s musical director almost from the start and has recorded with the full band, in small groups, and as an impressive solo pianist. Chucho’s first noted performance outside Cuba was during the 1970 Polish Jazz Festival, gaining praise from jazz luminaries like Dave Brubeck and Gerry Mulligan. In the last few years, Chucho Valdés has been phasing himself out of Irakere, letting his son “Chuchito” take his place. Instead, Chucho has been working with his own Latin-Jazz and Afro-Cuban quintet.

He remains one of the top jazz musicians living in Cuba.

The concert tour that Bebo and Chucho Valdés are undertaking in Spain is extraordinary for the simple fact that father and son have not played together during the last 18 years, and considering Bebo Valdés’ advanced age, there will not be many opportunities left, either.

But there are more concert dates earmarked where we can enjoy the two Valdéses: 26 July in Madrid, 28 July in San Ildefonso, 3 August in Zaragoza and 6 August in Sos del Rey Católico, Aragón. And they are planning to record a CD, together.