Spain’s Alhambra did not Quite Make it. No Pasa Nada. 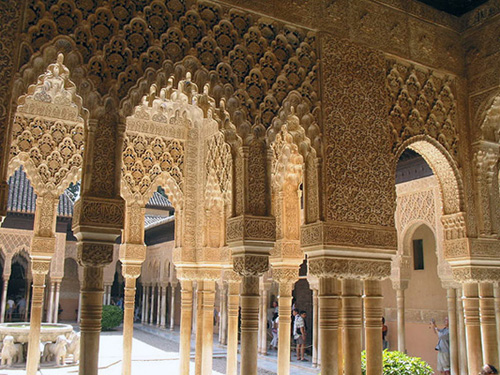 Saturday night was a big night for India’s Taj Mahal, plus China’s Great Wall, Jordan’s city of Petra, Rio de Janeiro’s statue of ‘Christ the Redeemer’, Peru’s Machu Picchu, Mexico’s Pyramid of Chichen Itza and Rome’s Colloseum, when the winners of an online survey about the New 7 Wonders of the world were announced at a gala ceremony in the Portuguese capital Lisbon, to coincide with the date 07/07/07.

Not so happy news for Spain and its Alhambra. But never mind. The Alhambra is still worthy of your visit, New Wonder or not. The Alhambra certainly is most wonderful.

The Alhambra was begun in the thirteenth century by Ibn al-Ahmar, the founder of the Muslim Nasrid dynasty. Over the years, what started as a fortress slowly evolved under Ibn al-Ahmar’s successors into a remarkable series of delicately lovely buildings, quiet courtyards, limpid pools, and hidden gardens. Its most celebrated portions – a series of courtyards surrounded by rooms – present a varied repertoire of Moorish arched, columnar and domed forms.

The Alhambra epitomizes a period of greatness of Arab culture between 711 and 1492 when the Moors ruled the southern part of the Iberian peninsula.

This Arab epoch was also called the period of Al-Andaluz. I will look into the aspects of this era of Al-Andaluz in Spain some other time, in case you should be interested.

What matters is that the Alhambra is the nearest of the New 7 Wonders to all of us residing in Spain. Much nearer of course than India or China.

If you want to visit you may want to wait until the end of the summer when temperatures are more likely to be less hot and when the number of visitors is likely to be slightly down. Entrance fees are 10 € for day passes, 10 € for night visits and 5 € if you only want to visit the gardens. You can book your entry tickets from 1 August under http://www.alhambra-tikets.es or from the gates.