¡Olé! to Bullfights in Pamplona 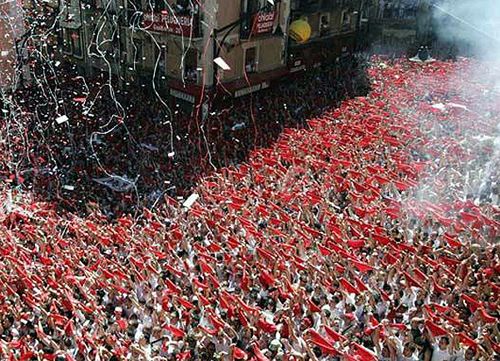 Yesterday saw the official opening ceremony of the fiesta of San Fermin in Pamplona, Navarra. That’s the world’s famous, annual bullfighting party, brought to fame in 1926 by the then lesser known author, Ernest Hemingway, in his novel The Sun Also Rises, who first experienced this Pamplona spectacle in 1925. He was honoured years later by having a street in the city named after him, the Avenida de Hemingway.

The author elaborated more on bullfights in Spain in his 1932 novel Death in the Afternoon. When Hems was first introduced to bullfights, he soon became fascinated with the ritual and, in due course, he craved it obsessively. I am not suggesting that Hemingway’s novels will endear you to Spanish bullfighting, but you may, through his writings, understand a little better what passion a bullfight sometimes brings about in some people.

The way Ernest Hemingway explains this archaic Spanish custom to us is like this: Bullfighting, as Ernesto says, is “a decadent art in every way … I was trying to learn to write, commencing with the simplest things, and one of the simplest things of all and the most fundamental is violent death. …. Bullfighting is the only art in which the artist is in danger of death.”

Bullfighting has long generated commentary and controversy. But Spain would not be Spain without its bullfights and Corridas. I do not claim to know a lot about Tauromania, but I do acknowledge that bullfights are important for the Iberian race. Let me state that I have been to a bullfight in Spain once, thus claiming a certain level of first hand experience. But let me also say, that I understand the polemic opposition that this subject brings about in a large audience, admittedly mostly non-Spanish.

As one should hopefully never attempt to teach the Eskimos, for instance, about their lifestyle regarding whales and polar bears, nor should one take a moral high ground over the British with regard to fox hunting, one should apply some tolerance when it comes to cultural dos and don’ts. I do not believe that it is my moral privilege or duty to teach the Spanish about bulls, religious beliefs, or any other cult topic. So, as long as the Spanish enjoy a Corrida in Pamplona, I let it be.

It is a fact that bullfights have been practised in Spain for well over 1,300 years. While the religious cult of the Minotaur goes back to the Iberians, the Greek and Roman influence converted it into a spectacle.

During the middle-ages it was a diversion for the Spanish aristocracy to torear on horse back. That was called Suerte de Cañas. This changed when the Spanish King Felipe V prohibited the nobles from practicing the sport as he felt it was a bad example for the public’s education. From then on the commoners took on the spectacle, facing the bulls unarmed, dodging and taunting the bull, to then eventually placing small spears into the bull, the origin of the banderillas of todays bullfights. Around 1724, the sport was transformed from horseback to foot.

The bullfight is literally a dance with death. The bullfighter has to carefully examine and study the movements and strengths of the bull. Mature fighting bulls can weigh as much as 600 or 700 kg. One wrong move and the torero will end up gored or seriously injured as happens again and again.

If you ever have watched Spanish TV and switched your set on during the month of May, you will have stumbled across San Isidro bullfights almost every day. Madrid celebrates its patron saint San Isidro every year with a fair, including cultural events and concerts, and three weeks of bullfights. Most bullfights, in Madrid and elsewhere, are won by the torero, but, there are exceptions to the rule. Which, I suppose, is only just.

And then there is Pamplona. This Navarran city is famous for the San Fermin festival, with its saint, San Fermin – the son of a Roman Senator who ruled Pamplona in the third century – giving the annual excuse to go wild and risk one’s life during the Corridas from 6th to 14th July, in which the ‘running of the bulls’ or encierro is one of the main attractions. Six bulls are released from a pen into a closed off street each morning starting on 7 July. They stampede some 800 m from the corral to the bullring where they will face matadors later in the day. In front of them run hundreds of people hoping to keep clear of the animals’ hooves and horns. 48 bulls end up going into the ring during the eight days.

14 spectators have lost their lives to the bulls in the streets of Pamplona over the last 60 years or so when they did not manage to escape the stampeding bulls in time. Alcohol or other toxins surely often have to be blamed for the unfortunate onlookers’ impaired reactions. 6 spectators were seriously hurt yesterday and ended up in hospital. No-one has died so far.

Within the bullring one finds life, death, ambition, despair, success, failure, faith, desperation, valour, cowardliness, generosity, and meanness – all condensed into the actions of a single afternoon, or even a single moment.

It surely must be one of the most exciting, sometimes dangerous, parties anywhere in the world. La fiesta más salvaje del mundo.

And for those of us with a conscience, you will be pleased to know that PETA yesterday staged a protest in front of Pamplona’s Plaza de Toros (bullring).