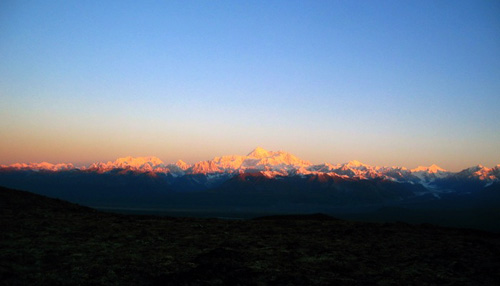 Our eldest daughter, Kilina, spent four months at UAF University of Alaska, Fairbanks (USA), from August to December of last year, participating in an exchange programme between universities. Check out her Alaskan blog here in case you should be interested. She became a bit of a Nanook whilst in Fairbanks. Kilina is now back at University of Sussex, Brighton (UK) where she has just finished her third year (out of four) as a Human Science student. Well done, Beans.

Fairbanks is just 300 kms south of the Arctic Circle, part of the Alaska Range at the edge of the Rocky Mountains. The Rockies are part of the Western Cordillera, one of the largest mountain belts on earth. They stretch over 6,000 kms from Alaska along the western side of North America right through to Mexico. The mountains are relatively young, having been formed mostly in the last 15 million years, by an oceanic part of a tectonic plate converging with a continent. There is still volcanic activity (Cascade Range) within in the Western Cordillera, which gives an indication of the ‘young age’ of the range. The highest peaks within the Rockies are those of Mount McKinley in Alaska with 6,194 m. The Alaskans are very proud of their Mount McKinley.

Kilina admired Mount McKinley from a safe distance (see photo above). Of course, Mount McKinley is White Man’s name for the big rock. Locally this mountain is known as Denali by the indigenous population, which means ‘the high one’ in the Athabaskan language. That’s a bit like Ayers Rock in Australia, called Uluru by the Australian Aboriginals. Perhaps it would be a sign of respect if we would use the locals’ name for things or rocks or places rather than the explorers’ or the colonialists’ names.

It seems that Global Warming has reached Alaska already. Whereas most years, temperatures in Alaskan Winters reach up to minus 50º C, Kilina only had to suffer up to minus 30º C. The Alaskans, Inuit, including the Iniupiat, known to us lesser mortals simply as Eskimos, complain that it is way too warm for the fish that they live off; whales do not come to this part of the world any longer at the habitual time, and everyone is worried about the livelihoods of the Indigenous population. Also, like its vast Arctic home, the polar bear is under unprecedented threat. Both are disappearing with alarming speed. Polar bears are at risk of becoming extinct due to the Bering Sea not freezing over enough any longer and subsequently the bears losing their hunting grounds. Thinning ice and longer summers are destroying the bears’ habitat, and as the ice floes shrink, the desperate animals are driven by starvation into human settlements, only to be shot. Stranded polar bears are drowning in large numbers as they try to swim hundreds of miles to find increasingly scarce ice floes. Local hunters find their corpses floating on seas once coated in a thick skin of ice. In 1981, the IUCN Polar Bear Specialist Group agreed that the world population of polar bears was between 20,000 and 40,000. As of 1988 the most accepted estimate for the Alaska populations was 3,000 to 5,000. Now we are in 2007. Any guesses, anybody?

Perhaps somebody could tell Mrs. Bush to tell her husband?